skip to main | skip to sidebar

Mercy me!  It has been a month since I posted anything!  Where has the month gone?  I've been super busy but have still found the time to stamp and punch and create.  I remember when I was a kid we used to make turkeys out of different leaves.  I looked at the leaves on the Autumn Accents die and knew they would work for a turkey so I put the tail together and then thought on it for a few days before I figured out the rest.  I have seen lots of turkeys with a similar head using the Owl Punch so I used that idea for his head and added wings from 2 more leafs. 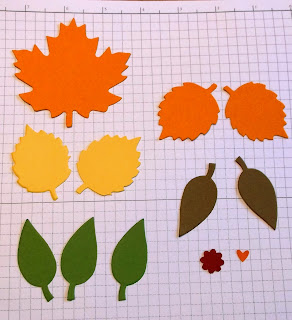 Here are the pieces I used except I forgot to put the owl punch in this picture. 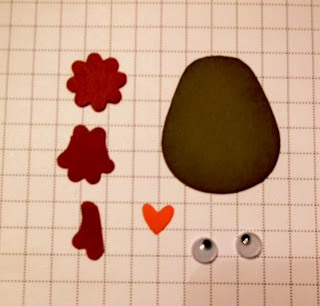 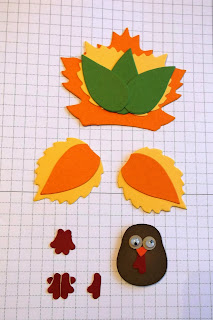 I stacked the leaves and trimmed off the bottom for the tail, then I put 2 leaves together for each wing.  I used the smallest flower in the Boho Blossoms punch for the waddle.  I made 2 waddles from each flower.  I trimmed off a petal, skipped 2 and trimmed off another petal and cut what was left in half.  The beak is one of the little hearts on the owl punch.  I placed these on the front of the owl who had his feet and ears cut off (ouch!).  I had several sizes of wiggle eyes.  On the smaller eyes I also used the circles from the owl punch behind the eyes to make them large owl eyes. 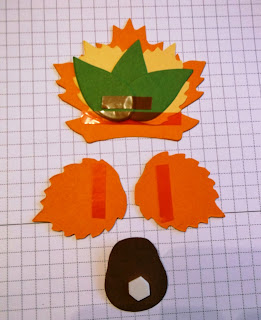 I used regular tape runner to put the tail and wings together but I used red tape to adhere them to the purse.  I cut it without the flap and it makes a nice little box to hold candy. 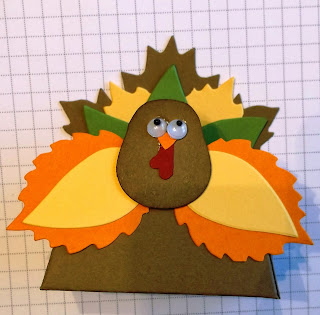 I filled it with some kisses, peanut butter cups and Hershey's mini candy bars.  I think it would be cool to put a little sign in each turkey with the names of your guests and use them for place holders at the Thanksgiving table! 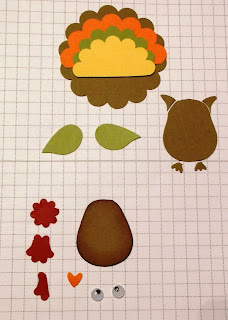 Here is another turkey I made to put on treats.  I used the same owl punch turkey face but used the 2 3/8" Scalloped Circle and the 1 3/4" scalloped circle (2 of each) for the tail and the Bird Builder punch wings for the little turkey's wings. 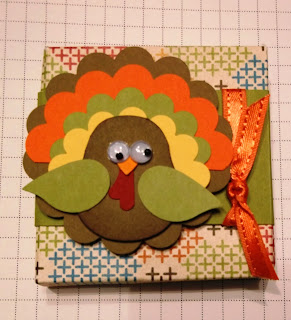 I learned how to make a box with the Envelope Punch Board so I used the little scalloped circle turkeys to put on the front of these too.  They are a perfect size to hold an individually packaged  Reeses Peanut Butter cup.
I hope you have time to  make some fun paper turkeys for Thanksgiving.  They are easier to make than a real turkey but I don't reckon they taste as good!
Posted by elaine at 1:33 PM 1 comment:

Join my Stampin' Up team!

$99 Demonstrator Starter Kit! Plus, get a free kit from our new catalogs when you join. 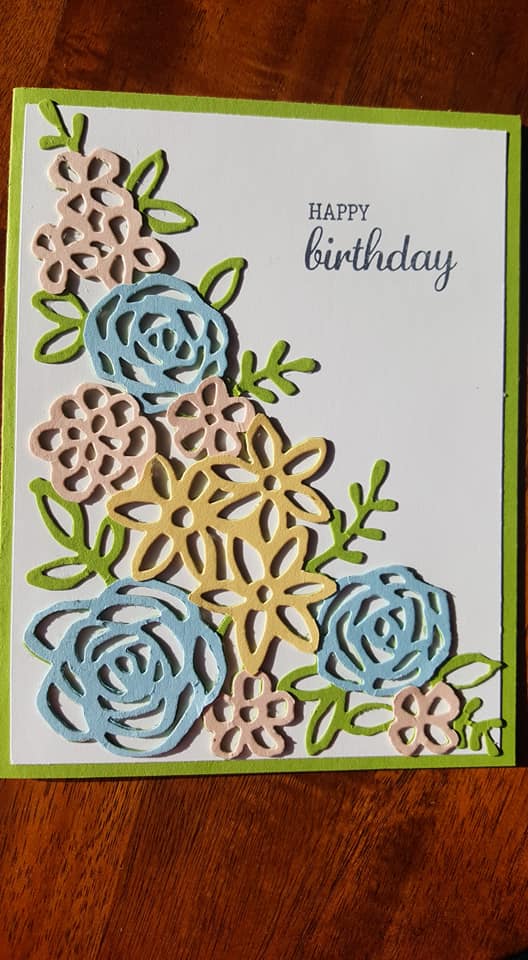 Go to my Stampin' Up website to see the new catalog and/or place an order!

Find out how you can feel better! 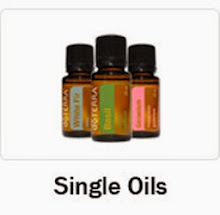 I use doTERRA Certified pure Theraputic Grade Essential oils. Click on my oil website to see how you can use these great oils too.